About the Library and Town 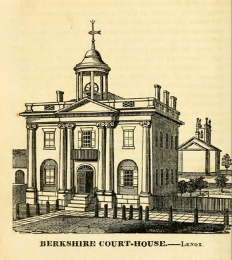 About the Lenox Library – its historical place in the Lenox community

The Lenox Library holds a very special place in the intellectual, cultural and historical life of its community. The stately Greek Revival library building, with its majestic Ionic columns and elegant cupola, was designed by Captain Isaac Damon and built on Main Street in 1815-1816. The building served as the county courthouse until 1868 when the county seat was moved to Pittsfield.

In 1871, Mrs. Adeline Schermerhorn, a wealthy summer resident, purchased the building for use as a “public library and reading room free to all visitors and inhabitants of Lenox.” Mrs. Schermerhorn’s contribution marked the beginning of the long and fruitful relationship between the “cottagers” and the Library. The Lenox Library Association, incorporated in 1856, moved into the building in 1874, and the space has been operating as a library since that date. Even during these early years the Library functioned as an important civic center for the whole community.

Beginning in the 1890s, the building also housed Lenox’s only town doctor, the town’s first telephone switchboard and fire alarm system. (Within its walls, it even contained both a jail and the offices of the Lenox National Bank.)

In 1940, in the same year that the Berkshire Music Center began operations at Tanglewood, the Lenox Library Music Department assumed formal status at the request of Maestro Serge Koussevitzky of the Boston Symphony Orchestra. During World War II, concerts at the Library helped keep music alive while activities of the Berkshire Symphonic Festival and Music Center were suspended.

Added to the National Historic Register in 1973, the building was most recently renovated to its original grandeur in 2002-2004. The original court room, with its exquisite domed ceiling, was reconstructed after a century in which the second story had been reconfigured beyond recognition. A climate-controlled vault was installed to preserve ancient town treasures. The raising of the cupola (removed upon the discovery of rotting support columns) symbolized the completion of renovations.

Yet while the historical ambience of the interiors has been restored, the library’s services are now firmly established in the 21st century. Today’s Lenox Library has grown to encompass a regional online catalog, audio-visual media, electronic resources, Internet access, and free WiFi. The congenial staff assistance patrons have long relied upon has been enhanced by providing high quality services and technologies which respond to, and sometimes anticipate, the patron’s needs.